Therapy for the Polity? Making a Case for Citizens’ Assemblies 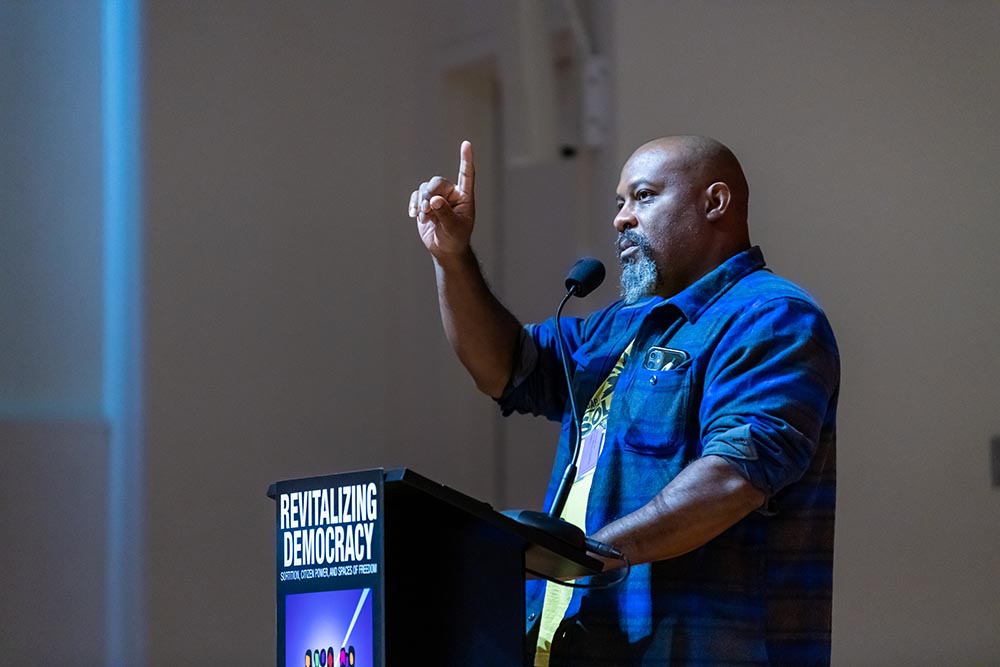 Kali Akuno, co-founder of Cooperation Jackson, traced the history of the Black assembly tradition in the American South at the Revitalizing Democracy conference. Photo by Karl Rabe.

Are elections actually bad for democracy? Might more participatory forms of deliberative democracy provide a way to help dissolve some of the gridlock around divisive issues such as climate change and police reform? These were some of the key themes recently explored during “Revitalizing Democracy: Sortition, Citizen Power and Spaces of Freedom,” a conference sponsored by OSUN’s Hannah Arendt Humanities Network (HAHN), a project based at Bard College that supports the integration and accessibility of humanities studies across OSUN institutions.

Bringing together activists, authors, scholars, local politicians, and students to explore the growing trend of citizens’ assemblies, the conference on the Bard campus in New York’s Hudson Valley attracted over 100 in-person attendees and over 400 online participants.

As explained in an opening panel discussion by author David Van Reybrouck, a specialist on citizens’ assemblies, elections and referendums are inherently divisive, and tend to “deliver one result, two divided communities.” Citizens’ assemblies, on the other hand, can enable local or national communities to work through their differences, providing a sort of “couples therapy” for the polity. Lasting a few days or several months, citizens’ assemblies convene anywhere from 30 to 150 randomly selected people for roundtable conversations that are facilitated by experienced moderators. After a period of deliberation and consultation with experts, the assembly then votes on final policy recommendations.

The tension between existing electoral democracy and more participatory alternatives was a key theme throughout the conference. Roger Berkowitz, leader of HAHN, reminded attendees that the aristocratic founders of the US political system considered elections a tool for maintaining elite control over a public that should not be trusted. Rather than encourage the type of popular participation exemplified by early American town halls, the US Constitution aimed to limit the engagement of ordinary, uneducated people. Berkowitz offered that citizens’ assemblies might instead be able to revive those “lost spaces of citizen freedom.”

The audience learned of multiple national assembly initiatives and their varying degrees of success. Jane Suiter, of Dublin University, reviewed the history of the Irish citizens’ assemblies on abortion rights and marriage equality, which led to major changes in the Irish Constitution. Helene Landemore, of Yale University, provided the additional example of France’s National Climate Assembly, which demonstrated the power of ordinary citizens to deliberate and even draft new laws, but which also lacked an effective enforcement mechanism. Landemore explained that while President Emmanuel Macron promised that the French Parliament would vote on the assembly’s 146 recommendations, the proposals were instead whittled down to a handful of legal changes, ultimately considered by citizens to be a betrayal of the process. 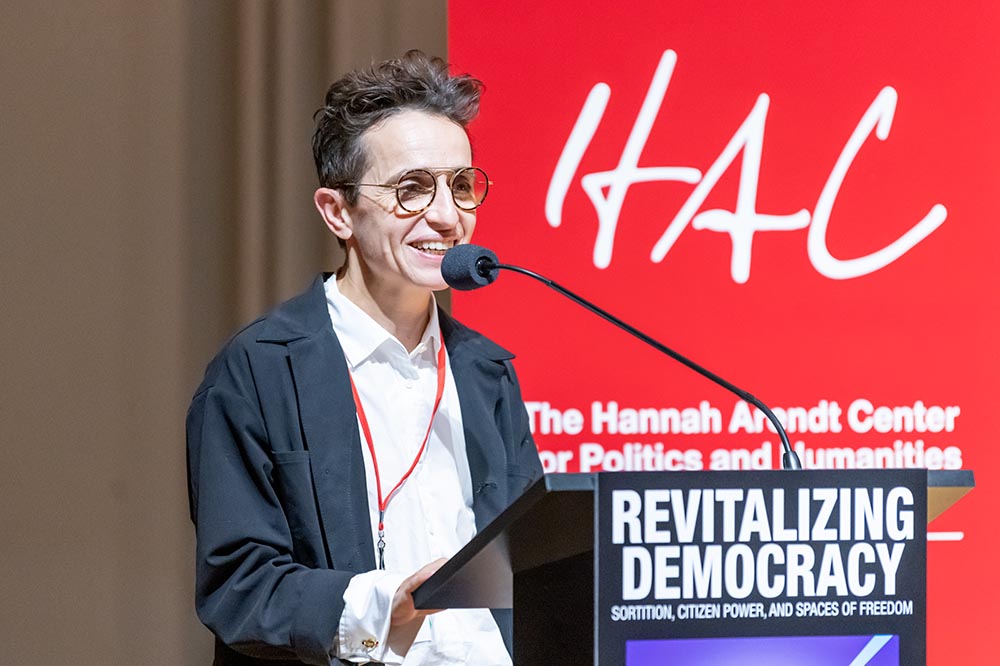 Masha Gessen discussing parallel polities. Photo by Karl Rabe.
While many speakers focused on state-led design of citizens assemblies by governments and experts, Kali Akuno and Masha Gessen spoke to the power of bottom-up organizing to reshape society from below or in parallel to existing institutions.

Akuno, co-founder of Cooperation Jackson, an emerging network of worker cooperatives in Jackson, Mississippi, warned against romanticizing early American democracy and citizenship, both of which deliberately excluded and exploited enslaved Black Americans. The American settler-colonial project had slavery as a key economic feature, and much of its anti-democratic design (e.g., the Senate and the Electoral College) continues to shape American politics, he said. Akuno traced the history of the Black assembly tradition in the American South, from the Reconstruction to the Council of Federated Organizations during the civil rights movement of the 60s and on to groups such as the Jackson People’s Assembly, founded in the 90s. Akuno stressed that democracy is something that needs to be practiced, and that without free time and economic resources, ordinary people would inevitably be excluded. Put in starker terms, he said that American democracy not only needs to be revitalized, it needs to be reborn.

Journalist, author, and activist Masha Gessen argued that even in so-called totalitarian societies, there always exists a parallel space where citizens can imagine and create pockets of a democratic society that might later blossom into larger movements. Gessen told the inspiring story of the Workers Defense Committee in Poland under communism during the 1980s, who, rather than retreating into internal exile, sought instead to convene in secret. There they assembled the underground publishers, councils, and independent universities that would later help seed the Solidarity workers’ movement. 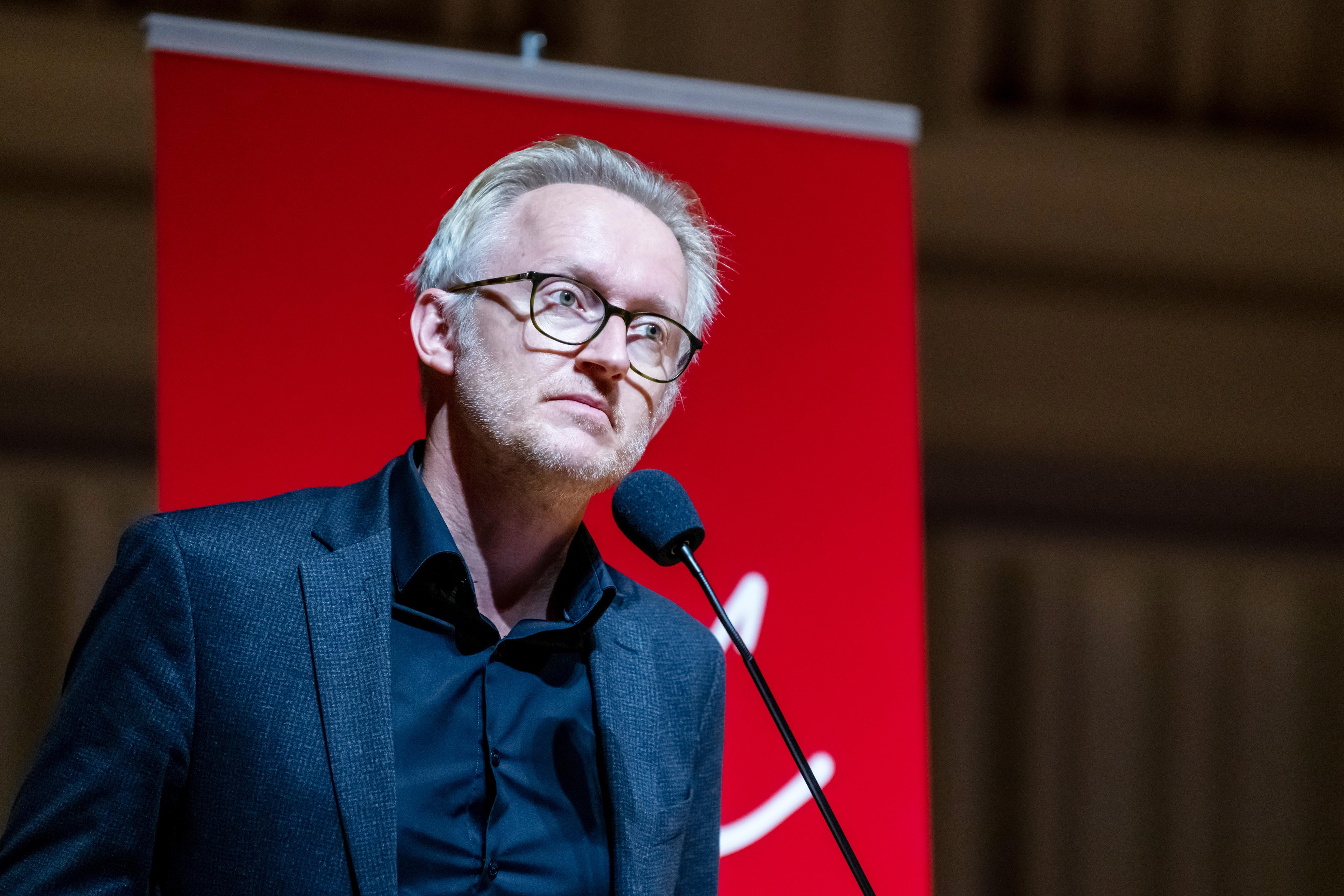 David Van Reybrouck said citizens’ assemblies can enable communities to work through their differences.
In one of the conference’s more provocative moments, Van Reybrouck asked the audience to reflect on the roots of the extremism that led right-wing insurgents to raid the U.S Capitol in January 2021 in an attempt to overturn the 2020 Presidential election. He asked if one of the agitators had been given the chance to speak their mind at a citizens’ assembly, “a place where he could express himself and feel respected,” would such a person still storm the capitol?  Referring to populist anger as a “gift wrapped in barbed wire,” Van Reybrouck asserted that “instead of running away from the barbed wire, we might try to disentangle it.”

Watch a recording of Revitalizing Democracy and find out more about the Hannah Arendt Humanities Network.