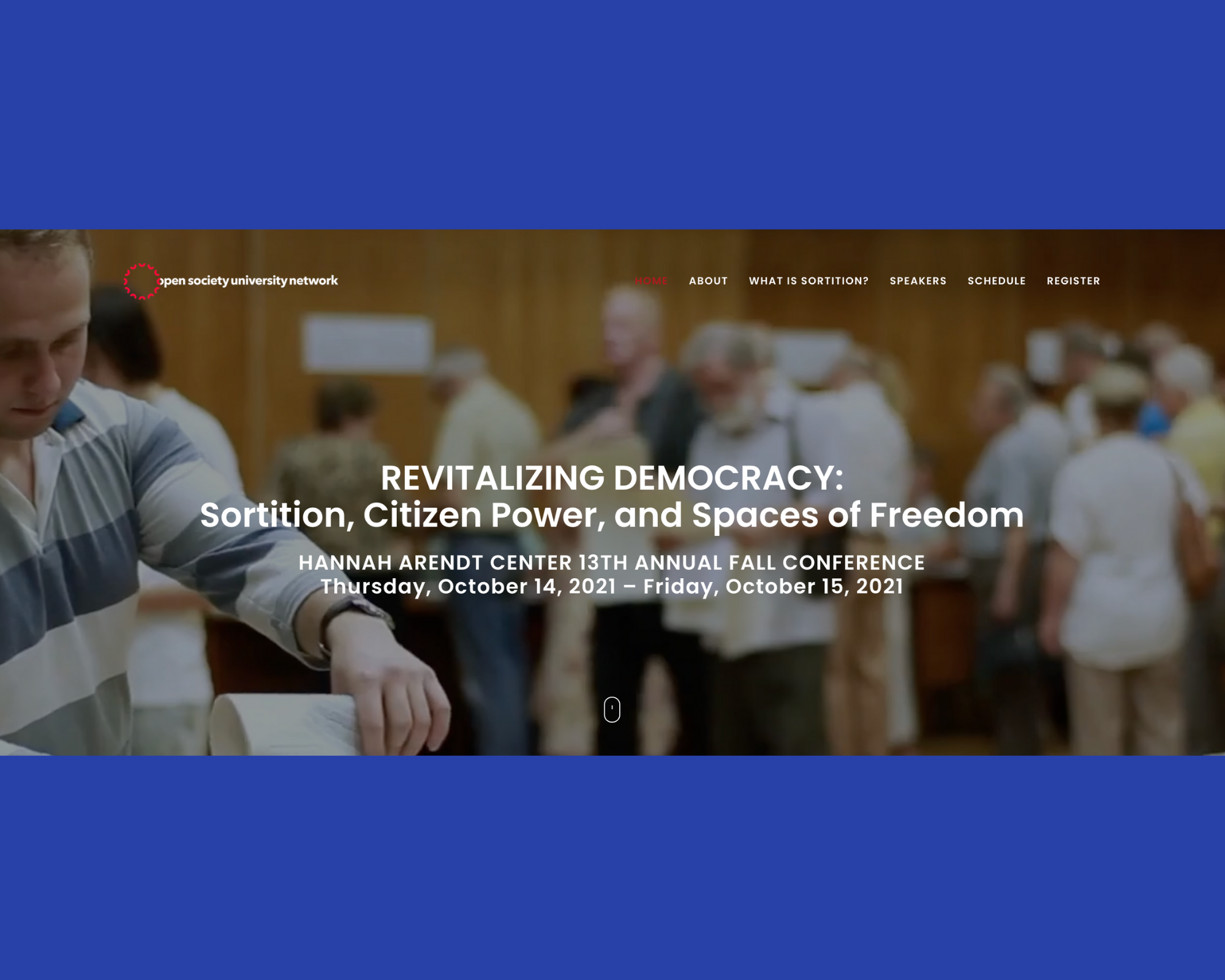 Roger Berkowitz, noted political scientist and director of the OSUN Hannah Arendt Humanities Network, has been exploring and working to share the debate around sortition and its impact on democracy for the last five years.

“Sortition, or the choosing of citizens by lottery to vote on key issues, was central to Greek democracy and democratic theory for more than 2,000 years” explains Berkowitz. “It then fell out of favor in the 1700’s, and was replaced by our current representative democracy. It is now getting new attention as a mechanism for democratic inclusion, often combined with the contemporary tools of digital democracy.”

On October 14-15, the Hannah Arendt Center at Bard College will host its annual conference, this year focused on “Revitalizing Democracy: Sortition, Citizen Power, and Spaces of Freedom,” giving people from around the world access to informed debate around sortition and its surrounding issues.
"What is Sortion?" Video by Professor Roger Berkowitz
Berkowitz and the Hannah Arendt center have been running the annual Arendt Center Fall Conference since 2006, and this year they have teamed up with OSUN to offer a new and enhanced style of digital meeting, one that will feature in-person presentations, online events, and digital educational assets that can be used before, during and after the live event.

“We decided to look into ways we could reach a larger audience that can be physically present for our annual event at Annandale.  We had experimented in 2020 with Zoom, but we knew we could do more, and we knew that the OSUN network could be key in these efforts,” says Berkowitz.

As they planned the 2021 conference, Berkowitz was introduced to OSUN partner and digital education leader Adam Stepan by Jonathan Becker, Executive Vice President of Bard College and Vice Chancellor of OSUN. “OSUN is expanding its digital presence and looking for new ways to connect thinkers across the network,” explains Becker. “Roger Berkowitz is an important leader in these efforts; he has travelled across the network to deliver in-person talks and has led many online conferences. We felt the sortition project was a great opportunity to pilot new digital tools we are already implanting in network classes and events.”

Adam Stepan is an Emmy-award-winning filmmaker and the director of the Picker Center Digital Education Group at Columbia University, where he spearheads Columbia’s collaboration with OSUN.  Since 2020 he has worked with OSUN students and faculty on digital storytelling projects, video case studies, and pre-recorded “flipped class” videos.

“Sortion is an issue that has levels of complexity and nuance, so we felt it would naturally lend itself to a series of ‘TED Talk-style’ lectures,” explains Stepan. “Zoom is a powerful tool, but we all are all facing Zoom burnout. We need to find ways to create high-quality content that can be used to make online digital events more engaging for participants and to help create real online communities around key issues.”

The team decided that the conference would feature a new interactive website, with pre-conference videos on key issues that could be watched before live debate begins. During the actual conference, visiting scholars would also record new “TED-style” presentations, so that the post-conference website could become a platform for ongoing learning and debate.

Since most people don’t have enough time to watch many hours of post-conference debate, shorter, more focused presentations in the TED style are the most practical solution, says Stepan, because these are assets that people can view and engage with more easily.

“During the conference we will invite some of the world’s leading scholars to create and present short video presentations,” explains Berkowitz. “We will then post all the videos to the website post-conference for the general public, and host an ongoing moderated discussion forum, encouraging other thinkers from around the world to join and add their own contributions to the debate.”

Masha Gessen, Russian-American journalist, author, translator and activist; Kali Akuno, co-founder and director of Cooperation Jackson; and David Van Reybrouck, renowned cultural historian, archaeologist and author, are among the forty prominent intellectuals who will speak over the two days of the conference.

“If the idea of sortition is to be democratic and engage citizens, we cannot do this by small in-person events that only a small number of people can afford to attend,” explains Berkowitz. “The in-person interaction and debate at the conference is vital – but we felt we needed to share it widely and offer paths for inclusion of remote scholars and students. We feel these tools can help achieve this.”

The 2021 Revitalizing Democracy Conference takes place October 14-15 at Bard College in Annandale, New York. In-person registration is now closed but virtual participation is still open. Pre-conference videos, a list of speakers and registration links can be found at www.sortition.academy.