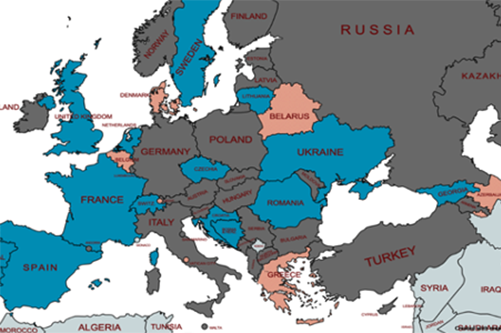 Map showing states (blue) where direct references to specific fundamental values were identified in the GOAF study on quality assurance. Image courtesy of Council of Europe.

Members of OSUN’s Global Observatory on Academic Freedom recently published a study commissioned by the Council of Europe (COE) examining the use of quality assurance (QA) tools to safeguard fundamental values of higher education in the European Higher Education Area (EHEA). The study published by COE sought to find out what role higher education values, such as institutional autonomy, academic freedom and integrity, participation of students and staff in higher education governance, and public responsibility for higher education, play in the regulatory frameworks for quality assurance in the EHEA agreements shared by European nations.

Researchers Daniela Craciun, Liviu Matei, and Milica Popović found that fundamental values have not yet gained a stronghold among many states throughout the EHEA, neither by definition nor operationalization within quality assurance procedures. Values associated with truth, democracy, and independent thinking need additional support and advocacy efforts from stakeholders in order to be incorporated into the European Standards and Guidelines (ESG), the backbone of the European Quality Assurance system, and subsequently, the internal QA procedures and regulations of state agencies.

The study confirmed that respect for fundamental values requires different instruments in different political regimes, and higher education contexts. Where there are stronger tendencies towards respect for the rule of law, as well as knowledge, research, and education, QA tools can significantly aid to advance the implementation of fundamental values within higher education. In states where there is no consideration for knowledge as a public good or for the rule of law, a different understanding of the values might need to be put to use, for example one that sees academic freedom as a human right, according to the researchers.

Sjur Bergan, former Head of the Department of Education at the Council of Europe, said the study yielded more impactful results than initially expected when the COE commissioned it. The Working Group on Fundamental Values, part of the Council’s Bologna Follow-Up Group, will use the study to prepare for the next Ministerial Meeting of the European Higher Education Area in 2024 in Tirana, Albania. This way the study will directly feed into the development of the European Higher Education Area.

The research team conducted a regulatory framework analysis of 49 EHEA member states, and of 50 QA agencies operating in these states. Based on the data acquired and analyzed within the countries, they also conducted a meta-analysis looking at the whole of the European Higher Education Area.

The study offered potential policy solutions for making fundamental values in QA a reality. It suggested that development of quality culture needs a stronger reference to democratic culture and fundamental values through EHEA policy documents, as well as clear definitions, monitoring and assessment mechanisms, and enhancement of democratic culture within the EHEA itself.

The authors concluded that quality higher education must establish, preserve and enhance institutional autonomy, academic freedom and integrity, participation of students and staff in higher education governance, and public responsibility for and of higher education. Without it, students in the EHEA cannot be expected to develop into active citizens, nor progress in research and science in Europe.