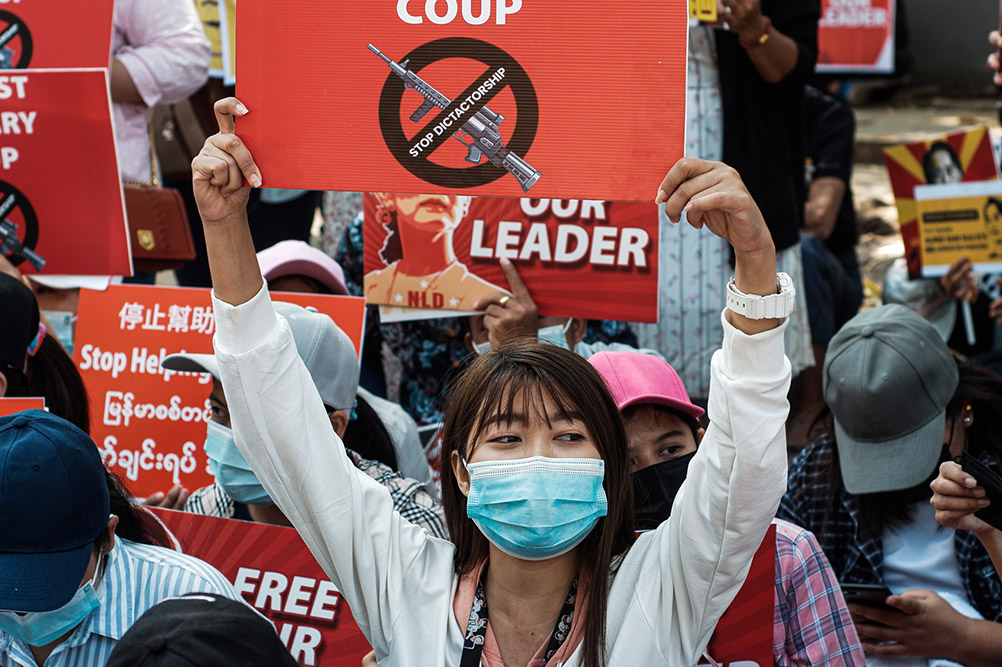 On February 1st 2021, the military in Myanmar took over all branches of government and arrested the country’s civilian leaders and members of its democratically elected parliament. Millions across the country rose in protest to defend democracy and freedom and to prevent a return to the brutal oppression brought about by the junta that had ruled Myanmar for decades, denying its people rule of law, basic human rights, education, proper medical care, and access to livelihoods.

The nationwide Civil Disobedience Movement united people of all walks of life, occupations, ethnicities, and religions. The response of the army and security forces has been harsh and indiscriminate – over 250 people have been killed or tortured to death in detention; over 2,250 have been arrested, including 547 students currently held in prisons without charge or access to legal assistance. Over forty university campuses and many hospitals in major cities have been taken over by armed military brigades. Dozens of young protesters have been killed by sniper fire. Civil society and media organizations have been subject to devastating raids, their staff detained, and assets confiscated at gunpoint.

Central European University and Bard College have been resolute supporters of the revival and reform of higher education in Myanmar over the years, through study and research opportunities; development of critical thinking, modern curricula and student-centered teaching; engagement in reform policy dialogue; and vigorous promotion of academic freedom and university autonomy.

As the founding members of the Open Society University Network, and on behalf of our global university community, we appeal to the military authority to cease violence against peaceful, unarmed civilians and the persecution of students, academics and civil society. We urge the immediate release of those unlawfully detained. We stand with the students, educators and all citizens of Myanmar and call on the army, police and security forces to refrain from denying the people of their country the future of peace, liberty and dignity they aspire to. We also call on the international community for solidarity, support and protection for our friends in Myanmar, who are in peril.