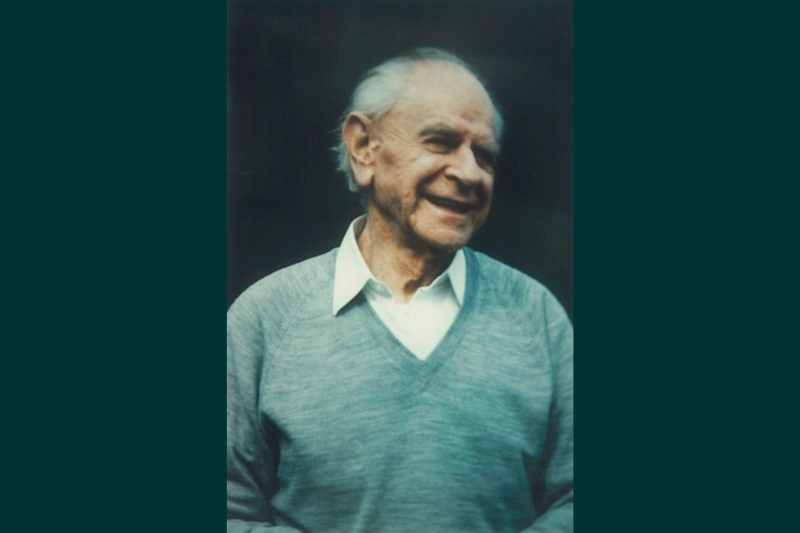 The final discussion in the "OSUN Talks" series sought to bring Karl Popper (pictured) and his concepts into conversation with current thinkers and ideas.

The Open Society Research Platform’s October 1 discussion on “Karl Popper in Critical Conversation: Arendt, Shklar, Berlin, and the Open Society” concluded the project's “OSUN Talks” 2021 workshop series. While the May 25th and June 4th workshops focused on aspects of "open society," the multi-faceted concept which is essential to OSUN’s mission, this event centered on Popper’s seminal text, The Open Society and its Enemies, putting his philosophies into critical dialogue with three other influential political thinkers.

In his introductory remarks, Christof Royer, of Central European University,  pointed out that the concepts of “open society” and “enmity” remain rather underdeveloped in Popper’s text. Reviewers of the Cambridge Companion to Popper have noted that scholarship on Popper resembles a “closed society,” as it is characterized by a “near total failure” to bring Popper and his concepts into conversation with current thinkers and ideas.  Even OSUN founder George Soros, who was a student of Popper, recently admitted that “It is fair to say that I have placed greater weight on the concept of open society than Karl Popper did.”

While Popper, Hannah Arendt, Judith Shklar, and Isaiah Berlin all wrote in a common tradition of anti-totalitarian thought, their works also diverge in important ways. Aside from initiating a conversation between the four thinkers, the panel sought to link the discussion to the present moment, harnessing the ideas and insights of these theorists to address contemporary problems.

In a wide-ranging and vibrant discussion, panelists broadly agreed that Popper's text continues to be a rich source of philosophical and political insights. For Allison Stanger, of Middlebury College, there are three reasons why the book remains topical and relevant: it allows readers to better understand the global challenges that Big Tech poses to democracies and open societies; it focuses on the elementary question of how to avoid cruelty; and it helps us to deal with the challenges of contemporary identity politics.

Oseni Afisi, of Lagos State University, emphasized how Popper’s commitment to rational conversation and deliberation is so crucial today, noting that Popper’s demarcation between an “open” and “closed” society is useful when applied to African societies and politics. Roger Berkowitz, of Bard College, emphasized that the book stands as a warning against the contemporary retreat from democratic openness and the shift toward totalitarianism. Like Stanger, Berkowitz also identified Big Tech as a serious contemporary threat, as increased reliance on Artificial Intelligence and algorithms diverts influence from the political realm. Despite their different interpretations of the book, all three speakers agreed that one of its greatest strengths is its eloquent critique of historicism – a mode of thought that embraces following prophetic laws of history as means of solving problems in the world.

Stanger pointed out the striking parallels between Popper’s and Shklar’s thinking: both developed a non-utopian conception of liberalism that seeks to avoid cruelty and to protect the liberty of the individual. Yet Shklar’s important distinction between the “politics of memory” and the “politics of hope” is one not found in Popper, Stanger said. According to Shklar, the politics of memory, cognizant as it is of crimes and atrocities committed in the past, should inform both contemporary politics and liberal education as an antidote to moralistic and hubristic attitudes.

Liberalism has long been accused of harboring an individualist conception of liberty that threatens to erode the “glue” that holds societies together. Afisi, who focused his comparative analysis on the notion of freedom in Berlin and Popper, insisted that this critique cannot be levelled against Popper. While Berlin famously preferred a “negative” conception of freedom over “positive freedom,” Popper drew on a “relational” conception of freedom–one that is exercised through critical engagement with others. This approach opens new avenues for thinking about the open society that are based on carving out a middle-ground position between individualist and collectivist notions of liberty.

Berkowitz noted a crucial difference between Arendt and Popper: while Popper clings to a notion of “truth” in politics, Arendt rejected this explicitly and saw the political realm as one of “meaning making.” Moreover, while Arendt celebrated plurality, Popper did not take human plurality seriously enough. As a consequence, Popper’s conception of open society creates a tension between its putative “openness” and its supposed ability to generate particular moral, social, and political values, according to Berkowitz.

The panelists sketched out a comparative conception of open society that shares Shklar’s aversion to cruelty and respect for the individual but which also benefits from Shklar’s emphasis on the politics of memory. This echoes Berlin’s warnings against “the pursuit of the ideal” as a dangerously utopian political program, but points to the need to explore how Berlin’s “value pluralism” shapes open society in theory and practice. Finally, the critical conversation with Arendt brought to the fore the question of plurality in all its urgency.