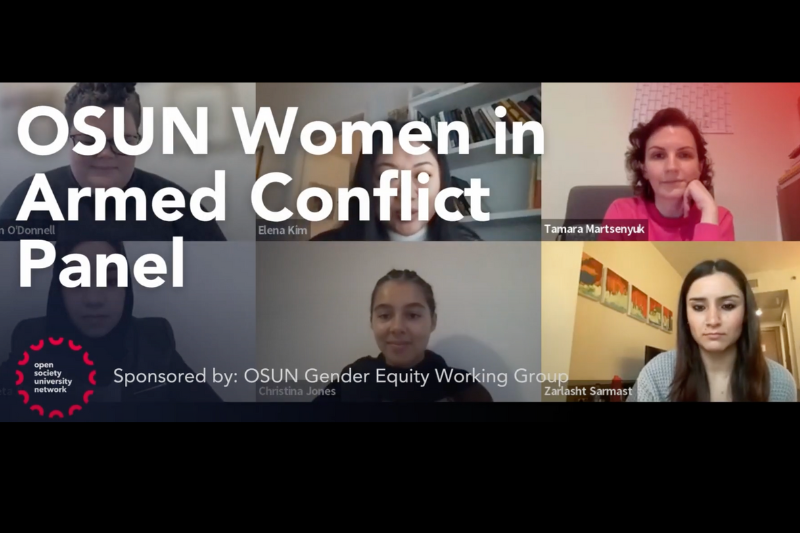 The OSUN Gender Equity Working Group recently sponsored a webinar on "Women in Armed Conflict" with Tamara Martsenyuk, Associate Professor of Sociology at the University of Kyiv-Mohyla Academy and Sweeta Akbari, Founder and CEO of Afghan Women Scholars (AWS), discussing the respective cases of the Russian invasion of Ukraine and the Taliban takeover of Afghanistan.

In her introduction, Elena Kim noted that while women and girls face innumerable challenges during military invasion, occupation, and conflict, this discussion would look beyond limiting narratives that cast women and girls as mere victims in the contexts of conflict and war. She said speakers would instead examine the ways women and girls are individuals with agency whose grueling work during times of armed conflict and post-conflict should not be treated as an afterthought to the more visible accounts of suffering.

Tamara Martsenyuk presented her interview-based sociological research on the role of Ukrainian women combating aggression in what she refers to as “Russia’s War.” She spoke of women as both actors with agency and as victims of gender-based violence, acknowledging the coexistence of their vulnerability to abuse in the face of occupation and armed conflict and their power as key players in the brave work of resisting domination–which includes the decolonization of academia.

On the tension between feminism and militarism, Martsenyuk said that “On this occasion of (war in) Ukraine, you could see that feminists, even those who are critical of militarization, do believe that … the Russians’ war crimes have left us with no options… They write that… we as feminists must lobby for defense for Ukraine.”

Sweeta Akbari spoke of the challenges faced by Afghan women scholars–students and academic faculty alike–whose ability to dedicate themselves to academic pursuits has been undermined by the Taliban since long before the “fall of Afghanistan” in 2021. Her analysis applied to both Afghan women scholars and academicians who wish to leave Afghanistan for the sake of their safety and their ability to carry out their work and to those who wish to continue to live and work in the country. Akbari shared her own experiences, including a challenging journey from Afghanistan to Finland, as an academic and as a civilian living under several decades of war in Afghanistan.

“This is the story of every woman in Afghanistan, despite their standing whether or not they had a major part in calling to the international community and asking for their rights,” said Akbari.  Watch the full webinar video here.