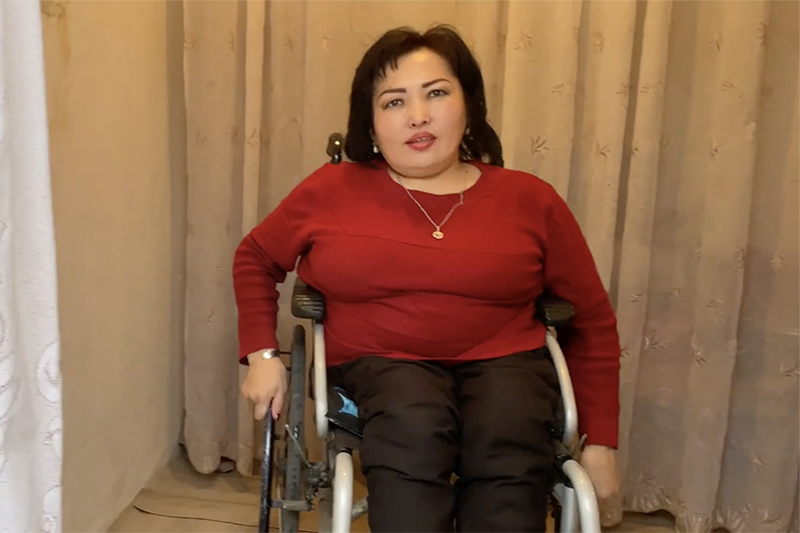 In the student-produced video Living with a Disability in Bishkek, Gulbarchyn Isaeva discusses accessibility challenges she faces living in Kyrgyzstan's capital city.

For Adam Stepan, some of the most exciting moments of teaching OSUN’s inaugural Visual Storytelling Workshop last fall occurred when he witnessed the powerful cultural breakthroughs students often made while watching and discussing their cohorts’ video documentaries across time zones.

“Statements like ‘So this is what Bishkek looks like!’ were common,” says Stepan, documentary filmmaker and Director of the Picker Center Digital Education Group, an OSUN partner at Columbia University. “And this is something that probably wouldn’t have happened with strictly Zoom-based discussions,” he adds.

Over three weeks, Stepan and fellow filmmaker Sean Steinberg trained students in Annandale, Berlin, Palestine, and Bishkek (Kyrgyzstan), to use inexpensive tools, such as smartphones, to create “digital case studies” of the research and civic engagement projects they undertook for OSUN network courses such as “Human Rights Advocacy” and “Global Citizenship.”

Audiovisual case studies documenting work around social justice issues—which were not only produced by the class but also used to teach it—are very effective tools for online learning, as they provide students with a “real world” connection that facilitates meaningful class discussion, according to Stepan. In addition to acquiring the skills needed for successful field production, students were trained in basic video editing and participated in a final video festival drawing on work from all the classes involved.

“Despite the huge challenges presented by the COVID-19 pandemic, students were able to work and collaborate in incredibly creative ways,” says Stepan. “The films themselves were also very powerful.”

Berlin College Engagement in Forced Migration, created by Imani Faber, Camila Rosales, Carla Schwingler and Milica Vuvic of Bard College Berlin, consists of interviews with students living in Berlin who are refugees from Syria and Iraq, as well as members of a student-led initiative that helps asylum seekers navigate European legal systems as they try to secure citizenship.

Black at Bard, produced by Bard student Hakima Alem and winner of the festival’s People’s Choice Award, centers on Bard College senior Tatyana Rozetta and Theater & Performance professor, Nilaja Sun, as they discuss 2020 efforts by Rozetta and four other BIPOC students to tackle problems of racial inequity in the school’s theater department. The video interviews document students’ intense labor, which motivated the department to commit to identifying avenues of implicit bias in its practices and to creating a permanent position for equity oversight.
Watch Black at Bard, produced by Bard College student Hakima Alem.

Stepan hopes all the videos from the workshop will be used in future classes across the OSUN network. “Even when in-person learning begins again, video case studies will continue to allow students to connect to issues and cultures in ways that classroom-based teaching alone cannot. I think the fact that these cases are made by and for students helps give them a special impact and relevance.”

The Picker Center at Columbia is working to develop a new version of the class to be run in the fall of 2021, as well as a project that would enlist students trained in 2020 to create new OSUN video cases. “Ideally we can begin a virtuous cycle of training and sharing of student produced videos around the network. OSUN is a unique organization, and it has an amazing opportunity to help us all rethink how classes are taught, and how students can connect and share their learning.”