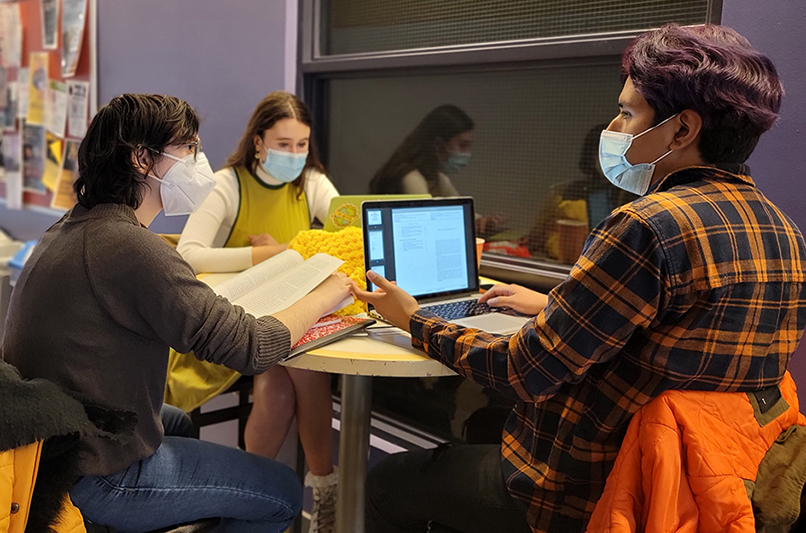 As Hyazinth Baumann completed her senior year at Bard, a small liberal arts college known for its vibrant classrooms and intensive faculty engagement with students, she made a surprising observation: one of her favorite courses as an undergraduate was taught online.  She appreciated the opportunity to learn together with students living all  around the world. Even as institutions transition back to a full slate of in-person classes, many students like Baumann want to maintain the valuable international connections they made through online courses during the pandemic. The global classroom looks set to become an essential feature of higher education.

While a “global classroom” typically refers to a small set of courses co-taught with one other university overseas, Bard and other partners in the Open Society University Network (OSUN) have offered students a distinctly different international experience.  OSUN Online Courses have brought together a highly diverse mix of students and faculty for the duration of a semester and given them ample opportunities to share knowledge and perspectives they previously might never have encountered.

The Civic Engagement courses taught by Bard’s Jonathan Becker, for example, included students from partner universities in Afghanistan, Austria, Bangladesh, Germany, Kyrgyzstan, Haiti, and Myanmar and from Tuskegee, a historically Black university in the United States.  Other OSUN courses have incorporated displaced people from Somalia, Sudan, Congo, and Burundi in Kakuma and Dadaab refugee camps in Kenya.

This diverse mix exposes students to a far broader range of perspectives than they previously had. Bard student Maureen Blackmore, for example, was inspired by the determination of her fellow students in the face of upheavals within their countries, such as the Taliban’s takeover of  Afghanistan, the assassination of President Jovenel Moïse in Haiti, and the crackdowns on political dissent in Myanmar.  She had previously approached civic engagement as participation in democratic processes. Through the OSUN course, Blackmore gained appreciation for the value of collective action regardless of circumstance to promote civic life, or at least to preserve it in the face of authoritarianism and civil strife.

OSUN’s enhanced version of the global classroom challenges students’ assumptions and worldviews like no other does. Sabina Rashid, Dean of the School of Public Health at OSUN partner BRAC University in Bangladesh, calls it a “multidirectional sharing of knowledge.”  Unlike many international programs that, in essence, export American academic programs, the enhanced global classroom actively invites knowledge from professors and students around the world.

A separate category of OSUN courses, called Network Collaborative Courses, are co-designed across partner institutions and offered simultaneously at multiple campuses.  Enrollment per course typically involves several campuses and can extend to a dozen institutions. The co-design of the global classroom thus has evolved from a set of bilateral collaborations to multilateral partnerships.

In 2020-21, OSUN offered more than 180 courses across 25 campuses worldwide to more than 3,000 students.  They began as a reaction to the pandemic but quickly grew to scale.  As courses moved online in the summer of 2020, OSUN institutions opened enrollment to students at other campuses, and students responded enthusiastically.  In course evaluations, the vast majority of students said they planned to take another OSUN course.  The number of OSUN courses has diminished this academic year, now that most OSUN students are back in person, but dozens of OSUN courses are still on offer.

OSUN courses have significantly expanded the course offerings for students across the network, and in some institutions, had a transformative effect.  At Ashesi University, for example, the introduction of OSUN courses more than tripled the university’s course offerings in the liberal arts each semester, according to Provost Angela Owusu-Ansah.

The possibilities for growth are promising. OSUN is developing certificate programs that will require one or more shared courses. The offerings of OSUN courses will be planned further in advance so that they can be better integrated into degree programs at partner institutions, including anticipated dual degree partnerships.  And the enhanced global classroom can facilitate greater access to in-person student mobility.  First-generation students at Bard, for example, might take the leap to study at the American University of Central Asia in Kyrgyzstan junior year because they already know students there from the OSUN courses they have taken.

The enhanced global classroom is expanding the horizons for students and faculty, whose enthusiasm is palpable. It may well set the trend for international collaboration in higher education over the years ahead.