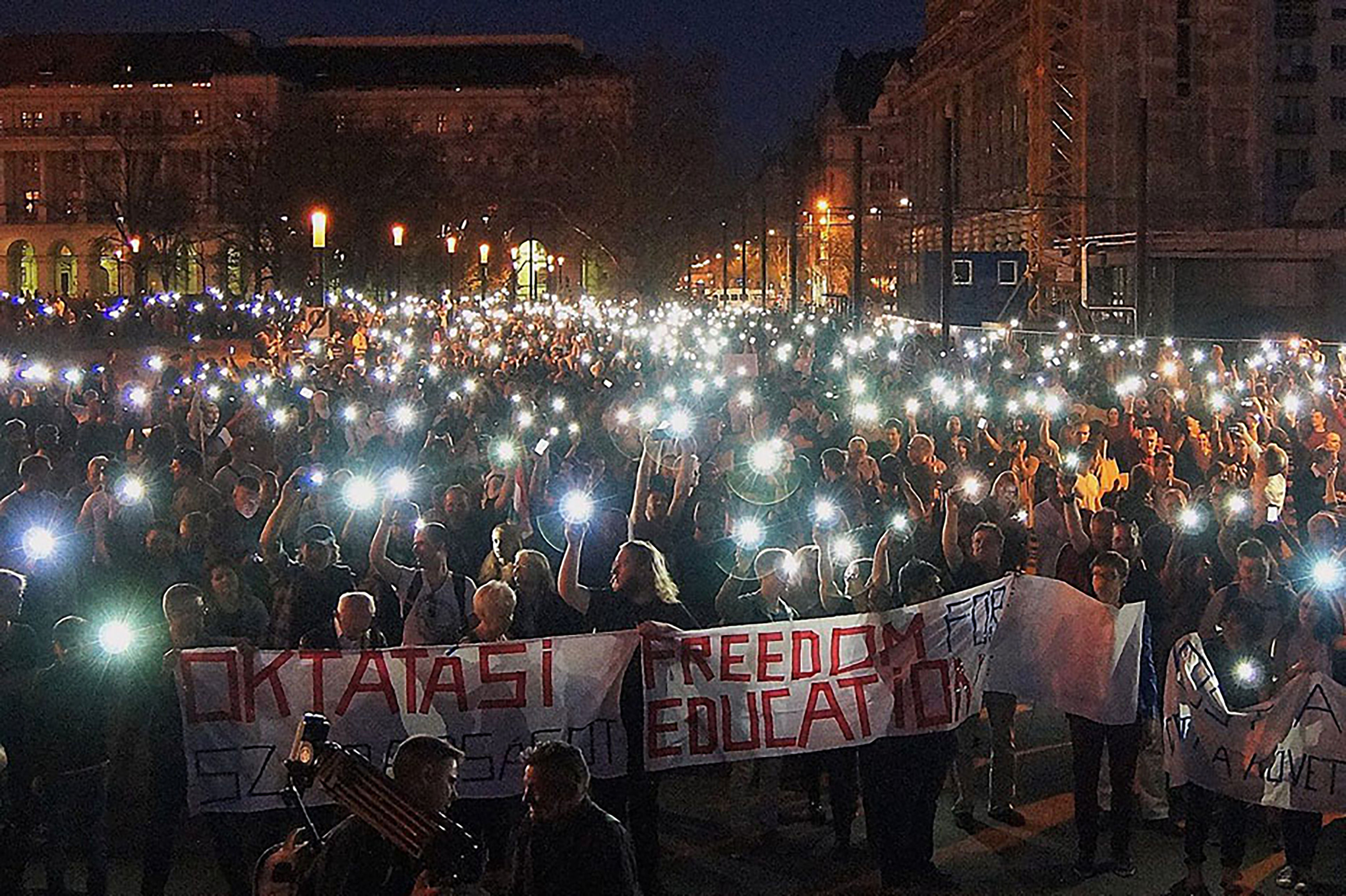 Photo of protest in support of Central European University by Matyas Szabo.

On January 20 and 21, OSUN's Global Observatory on Academic Freedom (GOAF) held its inaugural conference, presenting the findings of GOAF’s Annual Report alongside workshops and roundtables with academics, policy makers and students. The conference featured discussions about global developments in the field of academic freedom and debates regarding the most pertinent issues that have arisen in recent years.

"Our distinctive mission is to document developments in academic freedom which identify and analyze trends and directions regarding the conceptualization, codification, regulation and practice of academic freedom," said Liviu Matei, Director of GOAF, during the opening plenary. "We aim to create a platform for reflection, discussion and preparing for action with regard to academic freedom, and to defend and promote academic freedom."

Matei emphasized that GOAF's work is practically oriented intellectual research. The Observatory operates with a global perspective, as academic freedom is increasingly international and the conceptualization is no longer contained within regulations of national borders. For example, when CEU was under attack by the Hungarian government, it was the European Commission that brought the case to the European Court of Justice, which then judged the case based on an international treaty.

Milica Popović, Postdoctoral Fellow at OSUN GOAF, presented research from the forthcoming Global Observatory on Academic Freedom 2021 Report. She outlined the significant development of regulations and protections leading to international frameworks to protect academic freedom, and also emphasized how institutions, academic staff and non-affiliated researchers are impacted differently depending on the cases regarding academic freedom.

Taking a regional perspective, Gergely Kováts, Associate Professor and Director of the Center for International Higher Education Studies at Corvinus University, discussed the findings of the 2021 GOAF publication, Academic Freedom in Hungary, which he co-authored with Zoltan Ronay. Based on the analyses of legal regulations, interviews of higher education experts and academics, and cases published in the media, the paper analyzes how academic freedom has evolved in the Hungarian public higher education and research sector following the regime change in 1989 and especially between 2010 and 2021.

“These are extremely important and timely issues which concern us not only as academics, but also as citizens,” noted CEU President and Rector Shalini Randeria, concluding the conference. She added, “It is not only the autonomy of our universities which are at stake, but the very future of our democracies which are at stake today, to which the issue of academic freedom is really central.”

OSUN GOAF is part of the Yehuda Elkana Center for Higher Education at CEU. Sign up here for updates on GOAF’s developments and latest publications.