Center for Human Rights and the Arts Featured in Hyperallergic 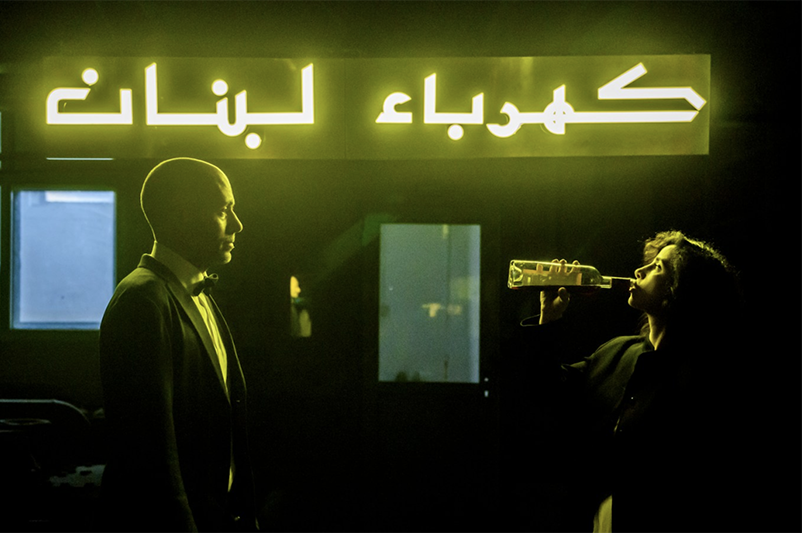 Tania El Khoury and Ziad Abu-Rish, "The Search for Power," a collaborative work on the political history of electricity in Lebanon (photo by Elina Giounanli)

This article was originally published on Hyperallergic.

The artist Tania El Khoury has written that she is “on a constant quest to find political meaning in the artistic form.” Her installations and performances — many of which are collaborative, interactive, and site specific — have focused on a wide range of subjects, including the refugee experience, state violence, and the long history of power outages in her home country of Lebanon. She groups her multifaceted work under the label of “live art,” which the Live Art Development Agency describes as a framing device (rather than an art form or discipline) for a wide variety of experiences that embody new ways of thinking about “what art is, what it can do, and where and how it can be experienced.”

In early 2021, El Khoury and her partner, the historian Ziad Abu-Rish, relocated from Beirut to New York’s Hudson Valley to jointly spearhead a new master’s program and the Center for Human Rights and the Arts at Bard College, in collaboration with longtime faculty members Thomas Keenan and Gideon Lester. Since mid-March, the team has premiered their first digital commission, launched a series of virtual talks, and begun actively recruiting its first cohort of international graduate students.

The two-year, interdisciplinary MA plans to host in-person classes at Bard’s Annandale-on-Hudson campus and welcomes “current and aspiring activists, artists, and researchers” who are committed to “understanding, exploring, and furthering the growing encounter between human rights and the arts.” The center, part of the Open Society University Network, aims to explore how today’s artists, especially those who work outside of hegemonic institutions, can impact contemporary politics. Its initial month of public programming featured the Congolese choreographer Faustin Linkyekula; Emily Johson, a performer, director, and land protector of of Yup’ik ancestry; and Lorenzo Pezanni and Charles Heller, a research duo behind the project “Forensic Oceanography.”

I recently spoke to El Khoury and Abu-Rish about their aims for the center and master’s program and how their work over the last 15 years has led them to this point.

Katie Kheriji-Watts: You two moved from Beirut to upstate New York in early 2021, after a year that was particularly traumatizing in both Lebanon and the United States. What was that like?

Tania El Khoury: We arrived just after the American presidency changed and we felt hopeful, especially related to border policies that would affect us and our friends, families, and colleagues.

It was a massive change for us. In Beirut, the situation continues to deteriorate drastically. I feel relieved that we survived last year, especially the explosion, because a lot of people didn’t. But I also have a sense of guilt, knowing that some people close to us, who would like to leave the country and see a brighter future, are stuck.

Ziad Abu-Rish: Things are very bleak in Lebanon right now and many are feeling hopelessness and despair. The political, economic, and public health situation is increasingly uncertain. There’s no trust in the government.

TEK:  And a total lack of accountability and justice.

KK-W: Speaking of institutional accountability, the new center and master’s program you are co-directing seeks to look “beyond art institutions and nonprofit organization industries.” Why is this so important?

TEK: We want to look beyond institutionalized venues — like universities, museums, and galleries — to support and be inspired by art that happens elsewhere. Not to exclude people who work in a traditional setup, but to not to be lazy with our curation. Same with activists. We want to look at a community level that’s rarely taken seriously in academia or in the art world.

ZA-R: A lot of scholarly research, teaching, and funding ends up reproducing existing institutions. And so, in thinking about the intersection between human rights and the arts, we want to look for it in places that rarely get a light shone on them, and to highlight and better understand them. There’s no naïveté about our own position as an institution funded by the Open Society Foundations, but there is an awareness of how to be more critical and not reproduce certain dynamics.

KK-W: Tania, how does it feel for you to go from being an independent artist to, quote unquote, become the institution?

TEK: So far it feels like an extension of my work, like one of the many collaborative art projects that I’ve been a part of. I enjoy bringing the point of view of an artist, which is often not fully understood by institutions when they don’t have artists in leadership roles. I’m trying to create an ethical environment in which artists feel comfortable and supported.

ZA-R: We’re very fortunate that we’re not integrating a pre-existing institution where there are constraints that are not of our own making. We’re building this institution from the bottom up in terms of who’s involved, who it targets, how it uses its money, and what we want to do with it.

KK-W: Speaking of what you’re building, I was wondering if each of you could point to a defining moment in your lives that really brought together for you, in a concrete way, how the arts and the principles of human rights interact with each other.

TEK: I’ve realized that the research I do is not just for sharing with my audience, but to produce knowledge that can be (and has been) used by journalists and activists to shift power dynamics. I’m inclined towards work that not only shares political opinion, but is also a research engine and tool to change narratives.

I’m part of a collective in Beirut called Dictaphone Group, which does a combination of live art and multidisciplinary research on urban space. We’ve done site-specific performances about, for example, the privatization of the seashore in Beirut, which wasn’t really understood before. And we’ve noticed that the conversation shifts when people change their relationship to public space and learn new information.

In my solo work, I made an interactive installation, “Gardens Speak,” based on 10 oral histories from people in Syria who were killed at the beginning of the revolution and buried in their gardens. A book was also published as part of the project, and it can be used to remember ordinary people’s stories of how the Syrian civil war started.

ZA-R: The turning point for me was really my encounter with Tania and her work. As someone who researches the social, cultural, and political history of Lebanon, I saw that Dictaphone Group was able to unearth histories that scholars had no idea were in existence, or were barely able to touch the surface of, because they had a very particular way of trying to approach their topic or subject matter.

I went to a festival in which Tania was performing her show Jarideh. It’s a one-on-one performance in public space that brings up questions of state surveillance, counterterrorism policies, and racial profiling. I saw how audience members were embodying issues that I might be able to write about or lecture on, but it was through the artistic encounter that they were able to get a visceral understanding of some of these dynamics. That, I thought, was much more powerful than what a text or a lecture could deliver.

KK-W: Ziad, you’re a scholar of the modern Middle East and North Africa and, Tania, a lot of your research explores the intertwining of art and politics outside of the West. How have these positions and topics informed your joint vision for the center and the master’s?

TEK: The center is targeted to a worldwide audience because it’s sponsored by the Open Society University Network, the aim of which is to find ways for various organizations, the majority of which are in the global south, to collaborate together. To me, it feels natural because I’ve always worked in and with people from different contexts.

ZA-R: Tania’s experience touring internationally has given us real knowledge of many artist and activist networks, which has been helpful in making sure that we don’t gravitate towards the “usual suspects” when we think of who to study, commission, or invite. So this has been at the core of our vision: to bring together,  elevate, and better understand the practices of activists and artists in different parts of the world at the intersection of human rights and the arts.

We held a virtual information session for prospective applicants and we had people from Venezuela, Russia, the UK, South Asia, and different parts of the US. Some of them are artists, some are activists who have never created a work of art, and others want to be scholars and eventually enroll in a PhD program. I think this shows that our vision of how to bring together different types of practitioners around a single theme or topic is starting out successfully.

KK-W:  You plan on commissioning digital work and curating a public program that highlights technology as a “creative tool of resistance.” What does this mean for you in the context of surveillance capitalism?

ZA-R: Your question makes me think, for example, of the fact that Facebook is collecting data left, right, and center, and using it to shape our political discourse and silence certain people while elevating others. So, while we will post announcements on social media, we don’t hold events on those platforms, which a lot of organizations do.

We’re still thinking about how to be digitally accessible without reinforcing problematic dynamics. It’s important because, in certain places, participating virtually in some of our events is safer than participating in-person would be.

TEK: We’ve also been inspired by the fact that, because of the pandemic, experiencing art online has become more accessible to people who would have been otherwise excluded because of geography, money, and even language. We don’t want to focus only on programming that can be seen by people who can travel and who are mobile.

KK-W: What is the single most important thing you want students to graduate from the master’s program having learned or understood?

TEK: For me, it’s two things: taking the multidisciplinary seriously as a tool for social and political change and taking your practice seriously.

ZA-R: I want them to understand that there are many different ways that advocacy for human rights and artistic practices intersect and to not simplify that encounter.

Tania always says that “it’s not enough to have a political opinion.” You have to take seriously the political potential or effect of your work, and that requires intentionality. Just because you claim to be doing human rights and the arts, doesn’t mean that you’re doing good. In fact, you could be doing harm depending on how you’re conducting yourself, producing work, or engaging communities. And that means taking seriously that it’s not enough to want to do good. You also have to make sure you’re not doing harm. Because there are ways in which human rights frameworks and discourses and practices have exacerbated violence and vulnerabilities. And there are ways in which art has not been emancipatory, but has actually been silencing, repressive, and deeply problematic.