From Despair to Engagement: Global Climate Teach-In Reaches Tens of Thousands of Students

Bard College students participate in the Worldwide Teach-In on Climate and Justice. All photos by AnnAnn Puttithanasorn, Bard College.

Last week, over 30,000 students at academic institutions across the globe gathered with faculty and staff to talk about climate solutions at the OSUN-supported Worldwide Teach-In on Climate and Justice.  The initiative was led by OSUN's Solve Climate by 2030 project and brought together climate-concerned educators and students at over 300 universities and high schools from Liberia to Colombia, Taiwan to Vienna, and Florida to Alaska, for bottom-up conversations about changing the future.

Bard College alum Karianne Canfield ’20 helped facilitate a teach-in session on “Dealing with Climate Depression” at Bard College in upstate New York. Following the discussion, a student said that this was the first time they had felt empowered to address their deep anxiety about the planet heating up, and what it meant for their future. 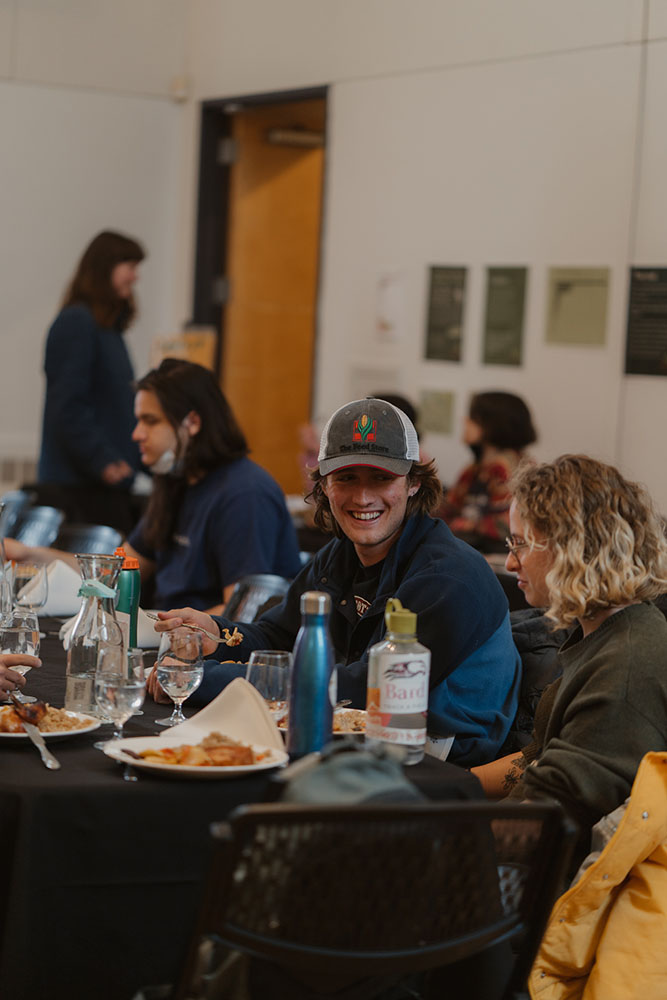 Bard College students enjoy a low-carbon dinner ahead of the Worldwide Teach-In on Climate and Justice.

Dr. Eban Goodstein, also at Bard College and one of the directors of the global teach-in, said, “We are living at a moment of extraordinary agency, with the tools at hand to solve the energy half of climate change by 2030. The teach-in is moving young people from despair about climate change to engagement.” He added: “As voters, volunteers, interns and in their career choices as artists, activists, scientists, or business people, young people are working to stop climate change.”

The Bard College headline event began with a “low-carbon” dinner and a dance performance. Over the next three hours, 25 faculty from multiple disciplines joined students in discussions including “Climate and Justice,” “Climate Stories and Songs,” “Climate Science: What You Need to Know,” and “Food Systems and Climate Solutions.” Students also learned about New York State’s ambitious climate law, and were invited to provide public comment.

In the Philippines, there were teach-ins at eight different locations. Adrienne Hangad, who helped organize an event at the Open University in Manila, was most engaged with the discussion about women and climate solutions. Prompted by a pre-teach-in discussion noting the absence of a climate change “anthem,” a team of Filipino organizers composed a powerful song, “Change Climate Change,” that was played at the event.

In Kyrgyzstan, climate workshops were held at 15 sites across the capital city of Bishkek. And from April 20 to 21, there will be an Africa-wide teach-in based in dozens of cities and towns, organized by the African Network of Young Leaders for Peace and Sustainable Development.

Commenting on her teach-in experience, Sofía Gómez, a student from Bogotá, Colombia, said, “I'm a strong believer in a mandatory class on climate change in schools and universities. This information allows us to open our eyes to how close we are to the climate crisis.” Khadija Ghanizada, a Bard student, added, “The teach-in was a window of hope for students. Most students I interact with are scared of climate change but also skeptical of the authorities and the work they are doing to mitigate it. We talked about how to push those in power to do their job in combating climate change.”

Building on a foundation of more than 300 participating organizations this year, the teach-in organizers hope to engage 1,000 colleges, universities, and other institutions next year, targeting at least 100,000 participants. “There are tens of thousands of climate-concerned educators around the world,” said Project Director Goodstein. “The teach-in provides a global platform for us to work together, to equip the rising generation with the tools and mindset to solve the climate crisis.”